I arrive at Antbear Lodge near Mooi River, in the rolling grassy foothills below Giant’s Castle. “Antbear where?” I hear you ask.

It is not so much where it is, although it is in a magnificent setting below the Drakensberg.

Sick of reading about lodges which “boast panoramic views of the Drakensberg”? Well, what is inside this lodge building is as breathtaking as the panorama: a celebration of wood of all kinds, from wattle to Japanese cedar, made into every fixture and fitting. Every door hinge is a multi-leaf celebration of hinges, every lamp stand, every stairway. And all are different – no standardisation here!

All are different because they have been made individually, over the 20 years since Andrew Attwood founded the lodge, by him, staff members – and volunteers, mainly foreigners, who have sojourned here and brought their own ideas and shapes.

We dine on exquisite cuisine under the menagerie of shapes, with the million-star Drakensberg sky before us.

A rendition of Amahlubi traditional stories about the stars by a local resident is an optional extra for slackpackers. It doesn’t really matter if the night is cloudy – the stories are, after all, make-believe.

Our cottages are, like the lodge building, a celebration of what we often do not look at –hinges, door handles, the shower wall, the bed.

Next day, following a fine breakfast, with our main bags to be transported to the next night stop, we hike across the green fields of the lodge and up into the hills. Our professional guide is Deon Small of Escourt, who offers the trail with three night stops: Antbear Lodge, Leopards Lair and Shaka Lodge. Each day we will walk about 12km, arriving shortly after lunch. We will carry only a small daypack with lunch (provided) and personal requisites.

By the way, I would like to here, formally thank matron for allowing me out for this trail.

The path leads up to the kind of scene written of by Alan Paton, “these hills are grass-covered and rolling, and they are lovely beyond any singing of it.” That was before wattle invaded the mountains – today wattle clearing is an ongoing struggle.

On the high ground we are struck by the many antbear holes. Perhaps these antbears are relatives of the antbear after which Andrew Attwood named the lodge – it lived under the floor of the ruined structure when he arrived.

Antbears, which are nocturnal, dig multiple holes. They eat ants, which are high in protein. “They don’t have a banting diet, they have an anting diet,” one of our party of six remarks.

We eventually descend to wind up a valley where we stop for lunch and a swim. The short afternoon walk to Leopards Lair takes up again via a vlei with many weaver and widow birds, and a ridge on which vulture hide is being built.

Leopards Lair is a working farm, completely different from Antbear Lodge. The farm’s owners, the Buys family, have a history stretching back to the Great Trek. On 5 October 1837 Piet Retief famously established a camp of 54 wagons on a Drakensberg ridge. From there he scouted the wonderful land below – now KwaZulu-Natal – and resolved to live there.

One of his group was a widow, Cecelia Johanna Jacoba Nel, an antecedent of the Buys family. Her first husband had been killed before her eyes in a raid by Xhosas on their farmhouse at Kat River, Eastern Cape.

She followed Retief into the new territory where she married for the fourth time (two more husbands having died in the interim).

“Ouma” Nel’s history is remembered in a written account and two wheels from her wagon which form part of the Leopard’s Lair accommodation.

Her descendant are farming with cattle and sheep but their farm also has a pet eland, emus and alpacas. Michelle Buys, our host, says this is proof that farmers don’t always eat everything on their farms.

Buys Jnr is anxious to fix his drone, and one of our party helps him. Ouma Nel Could never have dreamt any of this.

180 million years ago dinosaurs roamed these hills. Those times are evidenced today by pieces of fossilised tree on the Buys’s garden. There is of course a slight gap in our knowledge between the dinosaurs and Ouma Nel. A few years ago my therapist told me I had problems letting go of the past.

In the visitors book, past guests praise the hospitality and cuisine, which is indeed superlative. Farm stays are always better when farmers tell you about their lives.

“There’s a definite rumour that there could be leopard in the area” says Michelle. That is why the place is called leopards Lair.

But actually, butterflies, not leopards, are what these green uplands are known for. They are home to rare butterflies only seen between mid-October and mid-November. That is when lepidopterologists – experts not in leopards but butterflies – descend on the area. The butterflies fly under various names, including Midlands Widow (Ouma Nel was not the only widow, it seems), Escourt Blue and Mooi River Opal.

There are some big birds here too – like blue cranes (endangered) and a secretary birds which stalks at speed across ahead of us on the second day as we climb back to the ridge.

We then walk down on an old farm road lined with large stones. We are stopped in our tracks at the ghoulish looted grave of Herbert Gerald Wheeler, who died in 1943. He was presumably a farmer who not buried with gold, diamonds or money. So the looting was probably recent, for traditional medicine ingredients.

Below the grave are the nearly-obliterated remains of farmers’ houses.

Finally we arrive at the gate of the Zulu Waters reserve, from where a game guard will walk us to Shaka Lodge via the Bushman’s River, which is in flood. Walking up a tributary, we see a Natal Green Snake (harmless) making repeated attempts to swim up the rapid, we know not why. We also see yellow fish jumping the rapid. To me these sightings are new – and better than seeing a rhino.

But the 3,000ha reserve does have a rhino (and rhino beetles) – as well buffalo, giraffe and 32 species of antelope. Being open grassland, not bushveld, the game is in plain view. This is reputedly the only private game reserve in the Drakensberg.

Private means smart. Again, the lodge accommodation is totally different from that of the previous two nights. Formerly a holiday home of billionaire Australian Ian Gowrie-Smith, Shaka Lodge’s design and get-up speak of no expense spared.

The reserve was recently taken over by a Danish couple who initially came to South Africa to assist in developmental pig farming. They have opened it to visitors.

Our private chef will cook us the best meals possible. I ponder whether this luxury will unbalance my personal ecosystem. Will I be able to readjust to normal life hereafter? I warn my companions that if they hear muffled cries from my designer room, it will be because I have lost the battle with the many cushions on my expansive bed.

The third day begins with breakfast at the heated infinity pool. Then we head into the hills again with our guide, Mbongiseni Makhaye, who has worked in this reserve since its inception in 2000. We are also accompanied by Bettina Tetzlaff, a vivacious Dane with Viking looks who has endless enthusiasm for South Africa – a tonic in these trying times.

On higher ground, we view an old airfield built by Mr Smith for his guests to a birthday event. Please don’t say billionaires don’t have their uses!

We descend to a large dam, then into the grassy hills where we are surrounded by zebra, nyala, impala, wildebeest and blesbok. In the distance we spot two rhinos.

We walk on to the reserve’s exit gate, then cross another hill and a wetland before arriving back at Antbear Lodge. There we postpone facing reality for a short time longer, drinking a beer or three, watched by the wooden fittings and shapes. 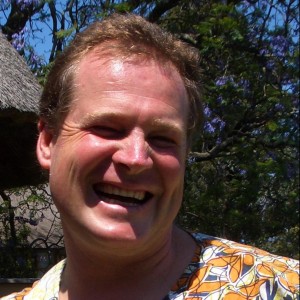 Andrew has been living in the Drakensberg region for the last 20 years. These mountains are his passion together with his obsession for sustainable living

wpadmin who submitted this post also recommends the following pages:

A slackpacker’s guide to hiking in the Drakensberg (1/25/2020) - The Drakensberg may be the highest mountain range in Southern Africa but it doesn’t mean you have to feel like you’re filming the latest episode… (Read more ... )

Great things happen when you get out of your comfort zone (1/25/2020) - The Drakensberg Mountains  continue to inspire  people with its dramatic beauty where you disconnect from stress and reconnect with your soul. For those of you… (Read more ... )

Exploring the Drakensberg – 5 Incredible day hikes (1/25/2020) -  With towering peaks, verdant valleys, forests and rivers, not to mention one of the highest waterfalls in the world, the Drakensberg Mountains offer some of… (Read more ... )

Drakensberg Golfing (1/17/2020) - The Drakensberg mountains boast a number of world class Golf Courses. Some of these top golf courses date back to 1973. Since then, the Drakensberg… (Read more ... )

Molly BosinMelrose, UK
Previous
Next
Menu
Win a Drakensberg getaway worth R18 000This will leave your friends green with envy

Win this 6 night holiday in the Drakensberg. We are doing market research as to how Covid 19 has changed the way people travel. Please take the survey. This is your chance to have your say and at the same time win big.

Take the survey now and win a holiday